In March I had the opportunity to visit Jerez de la Frontera in southern Spain. Jerez is famous for three things: flamenco dancing, dancing horse and sherry production – not necessarily in that order. Sherry is a fortified (read as potent) wine that is made from the white grapes that grow in the region of Cadiz.

The Phoenicians began making sherry in this area about 3,000 years ago. Tito Pepe was established in 1844 and has operated continually since that time. It is owned by Gonzalez Byass (the founder was Manuel Gonzalez Angel). We signed up online and took the 90-minute tour and tasting. There are several different options for tastings with both wine and tapas. Since it was lunchtime we opted for the tour with tapas.

The tour is well worth it. It is a beautiful facility – you will be transported back in time. Our English-speaking guide was knowledgeable and very friendly. He began with a short film on the sherry making process and a bit of history hosted by “Uncle Pepe”. I learned a lot about the sherry making process – prior I knew very little. Sherry comes from two types of grapes: most common is the Palomino grape which makes a wide range of sherry, from fino (light, dry and pale) to oloroso (heavy, dark and dry). The second is Pedro Ximenez grapes. This is used to make the sweet, desert wines. 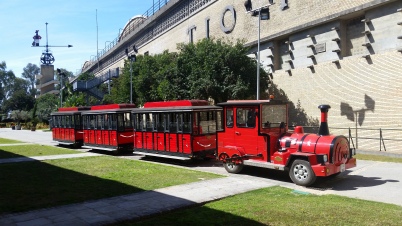 The train ride is part of the Tio Pepe tour.

One of the things I really enjoyed was a barrel room that had the signatures of many celebrities who had visited the bodega. Among them are Steven Spielberg and Winston Churchill. There is also a little train that takes you around the grounds. I had only seen this once before at Freixienet. It makes it much more efficient to tour the immense grounds and facilities. The tasting was also quite nice. Our tapas included a bit of jamon, potato salad and cheeses. 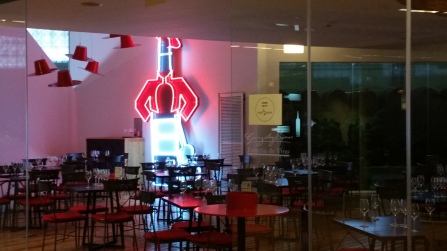 The tasting room at Tio Pepe

One plus is that Tio Pepe is one of the few bodegas open on the weekends. They usually offer tours in Spanish, English and German. Cost ranges from 14euros to 20 euros depending on the number of wines that you taste and if you include tapas.  Unless you are a true sherry lover, you will probably be happy with the 2 wine tasting. 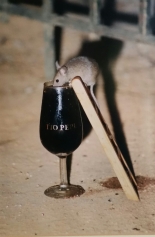 Susan’s Score – A must visit if you are in Jerez de la Frontera. It is probably the most famous sherry producer in the world. You will learn a lot about sherry and a bit about the history of the area. You may even find a bottle or two that you will want to take home.